The Turk Glove
2006
PVC and other plastics, electronics, body filler, found objects
This "mechanical hand" was commissioned by actor, Brett Keyser as a costume element for a series of performances in which he played the part of a chess-playing automaton called The Turk.

In addition to the outdoor performance shown here at the Philadelphia Waterworks, Brett also did several more elaborate indoor performances at the American Philosophical Society, for which I created a chess set from acrylic rods to be played with on an illuminated board of Brett's design. (see Acrylic Chess Set in my portfolio)

For more information about The Turk, Brett Keyser, and other related things, check out "Nightjar Apothecary" in my Links. 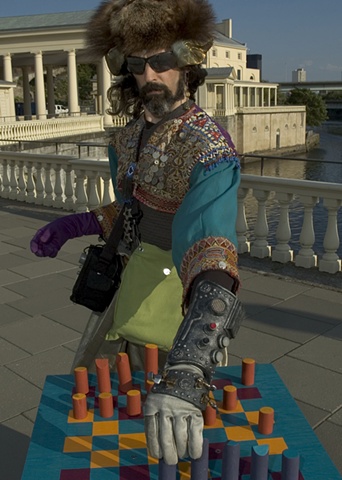